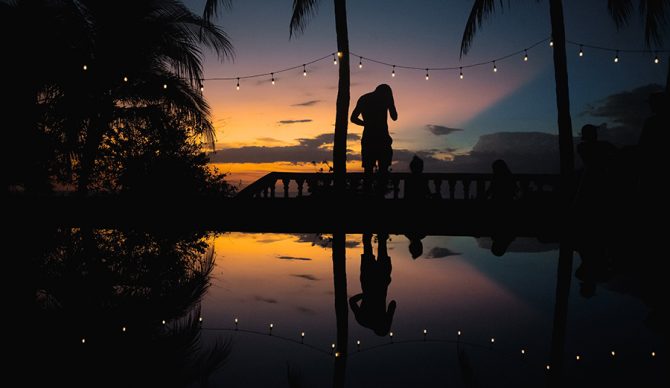 We bounced along the dirt road on our way south after a day on the boat exploring northern river mouth waves. The surf was well overhead and the sun unrelenting. We had six people packed in the car, and no one made a sound the entire ride back. After four hours in the water and a lengthy boat and car commute, the group was spent. We pulled up to the gates of the surf camp, slowly unloaded the car, and each made a beeline for the nearest hammock. I swayed back and forth with my hammock in the wind, trying to recover from the day’s session.

Through barely opened eyes, I spotted Gerritt move towards the kitchen as he shed the mantle of surf guide to resume his managerial duties. Gerritt and I were caught inside for the last 20 minutes of our session, taking consecutive waves on the head and battling a Sisyphean current as we paddled towards the boat. We also both woke up at 4 a.m. I was laid out in a hammock by noon, resting up so I could spend the rest of the afternoon working on the computer. As the co-owner and manager of Amaru, a yoga and surf resort in Nicaragua, Gerritt didn’t have that luxury.

From my swinging vantage point, I watched as Gerrit assumed several roles while scurrying around the property, including but not limited to hotel manager, head gardener, restaurant manager, reservations specialist, web developer, head of marketing, and surf guide. He moved from task to task, refusing an afternoon surf, spending much of the evening hard at work, and it made me think back to the many conversations I’ve had with friends and fellow travelers about owning land abroad.

Like countless surfers before me, I’ve long dreamt of owning land on a stretch of swell-rich coastline. Beyond the investment opportunity that many foreign landowners seek in Central America, owning land in a surf destination allows you to spare the surrounding area from morally corrupt, capital-driven investors who would turn your corner of paradise into a golf resort. As a freelance writer, I don’t have the privilege of buying land outright without outside investment. I’d most likely have to run a small business to cover the cost. Like, say, a surf camp. I’ve always told myself if I owned the land near my favorite wave, I could proactively combat coastal gentrification, involve the local community in every stage of my business, and help create jobs. Regardless of how much work it would take, I’d start and end each day with a surf at one of my favorite waves. 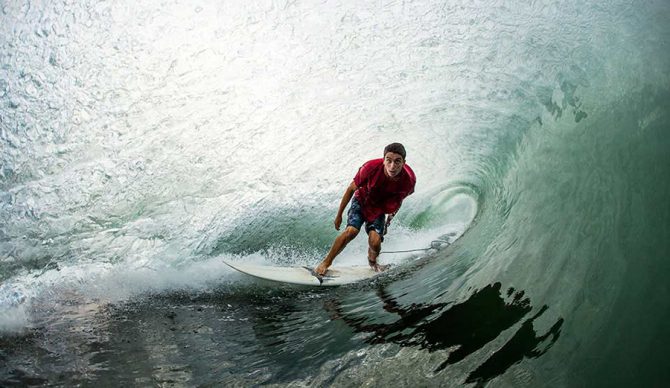 That’s exactly what Gerrit aimed to do with Amaru, and for the most part, he’s been successful. Amaru’s primary investor and Gerrit’s partner is local to not just Nicaragua but the neighboring coastal community. Amaru employs about a dozen Nicaraguan workers between the hotel and the restaurant, and they are active within the community. Watching Gerrit work 16-hour days that often begin at 4 a.m. made me reconsider what it may take to get a surf business off the ground in a foreign country. I talked with Gerrit and a few friends and colleagues who also own surf businesses abroad.

Gerrit begins each day cleaning up after guests and answering emails with his morning coffee. By 5:30 a.m., he’s usually in the water surfing with guests until about 9:30. Afterward, he has breakfast and conducts various staff meetings until noon. From 12-2 p.m., Gerrit’s on the phone with potential guests, contractors, or his girlfriend. From 2-4 p.m., he tries to duck into the daily yoga class and handle one or two small maintenance projects. From 4 to 5, he tends to the resort garden, where he grows much of what his guests consume daily. At 5 p.m., Garret enjoys the sunset before dinner with guests and heads to bed at 8:30 to start it all over again.

Gerrit sees Amaru as the culmination of a life dedicated to surf, travel, and a love affair with the Spanish language that began in Chile. Amaru was slated to open in 2020 at the height of the pandemic. Covid turned out to be a blessing in disguise. The traveler drought of 2020 and 2021 allowed the Amaru team to further improve the property and ensure they were ready to receive their first guests in the spring of 2021. When I asked Gerrit what surprised him about running a surf resort, he claimed it was the sheer amount of logistical and administrative work. “My phone is always ringing,” he says. “One thing I’m starting to learn is that I can’t do everything. I think the key to running this business will be finding a few key specialized individuals and managing them effectively. I may live in paradise, but I can’t remember the last time I sat in a hammock. It’s been pretty non-stop lately.” 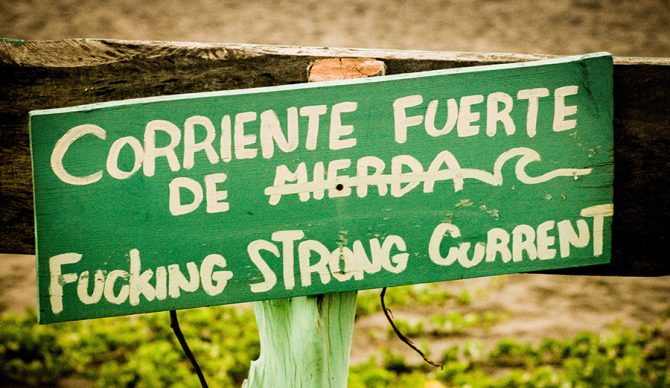 Looking out for those who can’t always look out for themselves. Just part of the gig. Photo: Keaton Day

Gerrit’s hunch about not being able to do everything was spot on according to Jonathan Griffin, the owner of Thunderbomb Surf Camp, an all-inclusive surf resort in Nicaragua that caters to the core surf demographic. Jonathan’s business has taken off in recent years in no small part thanks to Thunderbomb’s massive Instagram following, which Jonathan has spent hours each day building for the better part of the last decade. Once guests are on the ground, however, it’s impeccable service from the team at Thunderbomb that keeps them coming back year after year.

Like Gerrit, Jonathan moved to Nicaragua for the waves. He found his way into the surf hospitality line of work after two years in Leon, hustling at bus stations for commissions from local hostels. After finding an investor and opening Thunderbomb, Jonathan continued to struggle for years. “We would have month-long stretches without guests,” Jonathan admits, as he was adamant from the beginning about the type of demographic he wanted to target. Thunderbomb offers high-dollar, all-inclusive packages and he wasn’t willing to compromise his goal to make ends meet in the early days. During our phone call, Jonathan revealed that in the first year of business, there was a point where they couldn’t afford water delivery when guests weren’t there, so the team survived on coconut water until the next deposit came.

While Jonathan surfs every morning, he very much treats running Thunderbomb like a 9-5.“You have to put the laptop time in,” he says. “No one is going to market and sell your business the way you want them to. Running a surf camp, in a lot of ways, is still a desk job. It’s about putting content online constantly and pushing it out there and contacting potential guests.”

Jonathan can put in the hours behind the computer because of his manager, German, and the rest of the Thunderbomb team that provide the service Thunderbomb guests are accustomed to. “I got lucky with German,” he admits. “My advice to anyone else in this line of work is to find someone you’re on the same page with business-wise and morally and have them go out and bring you more workers like them.” 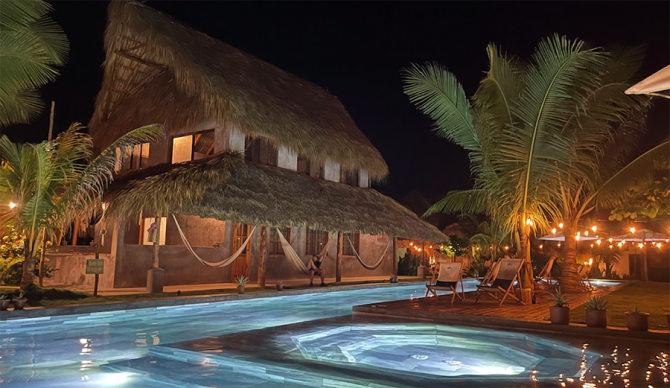 All for a little piece of paradise. Photo: Cocori Lodge, Guatemala

I also reached out to Walid Nasser, one of the owners of Cocorí Lodge, a popular surf camp in Guatemala. Like so many before him, Walid and his business partners saw Cocorí as their ticket to achieving their dream of living at the beach, surfing every day, and making money doing what they love. Walid and his partners secured the initial investment for Cocorí and set up a lively beach hostel in El Paredon. Before even opening, the trio behind the camp went to work building their brand online and pushing Guatemala surfing content out to the masses.

Then the pandemic hit. “Covid was a make-or-break moment for us,” he says. “We didn’t have any guests for six or seven months. We could have called it quits, but instead, we decided to double down and find new investors to renovate the property.”

Cocorí is currently undergoing a massive facelift that will allow it to cater to all demographics of travelers, from backpackers looking for a shared dorm to travelers searching for a beachfront vacation rental. I asked Walid what allowed Cocorí to grow during such trying times and what’s made his experience owning a surf camp positive. “I’m lucky to have the business partners that I do,” he said. “Having reliable business partners gives me the freedom to actually enjoy what we’ve built.”

From my conversations with Gerritt, Jonathan, Walid, and many others, I gathered that none started these businesses for the implied hammock time and relaxing afternoons in the sun. Rather, each set out to build something worthwhile centered around their passion for surfing — even if they’re not always the ones in the water.