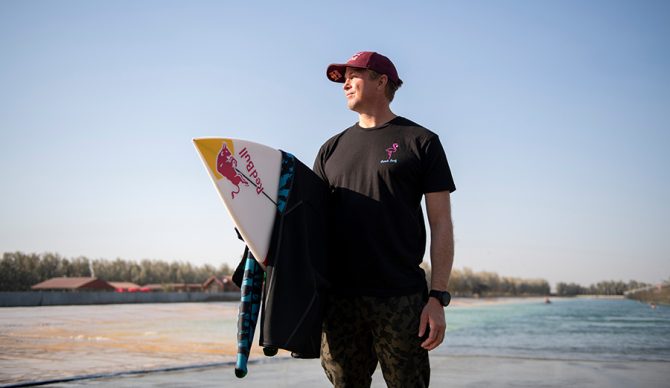 When you see Jamie O’Brien strutting down the beach towards maxing out Pipeline, wearing a self-branded speedo and lugging a soft-top under his arm, you’re probably not thinking, “there goes surfing’s greatest serial entrepreneur.” Jamie, however, is just that. Besides being the best modern Pipe surfer with two Wave of the Winters, a Pipe Masters win, two Pipe Pro victory, two Dai Hui Shootout wins, and too many flawless tube rides to count, Jamie is perhaps the surf world’s most savvy businessman. He has single-handedly shaped and reshaped the earning potential of free surfers. Most people know Jamie O’Brien from his prolific and viral vlogs, his Red Bull series, or his early career films that kick-started one of the most interesting free surfing careers out there. When Jamie chose to end his series with Red Bull and film under his own brand, he took a risk and proved to be ahead of the curve, paving the way for a new generation of free surfers to earn a living while owning and releasing their own content. Now, J.O.B. is trailblazing yet again with his new North Shore Surf School and surf progression app.

Jamie’s success is no secret; he has a whopping 1.1 million followers on Instagram and 803 thousand subscribers on YouTube. These kinds of numbers don’t just happen; They require an immense amount of dedication. What surprised me during my conversation with Jamie was his methodical approach to business, which is the same approach he took to mastering Pipeline, a wave that he knows arguably better than anyone surfing today.

“I used to sit on the beach at Pipeline and watch Bruce Irons and Johnny Boy Gomes for hours and watch all their videos. If a surfer I liked was a goofy footer, I’d watch the TV in the mirror, so they looked like a regular footer. I was such a freak about learning to surf.”

Now, decades later, Jamie and his team are taking the same approach to his new business ventures.

What made you want to move on from hosting vlogs with Red Bull to releasing content on your own platform?

I saw how popular the web series was becoming, and I saw it as a test to see if I had the reach. I reached out to Ben Gravy initially to see what it would take. Yeah, you can have a million followers on Instagram, but to me, it was kind of a far fetched thing. I didn’t know if it was going to work or not. I thought “I’m just going to go for it,” and it worked wonders. I did all the editing for about the first 12-15 videos, and I was so burnt out. My eyes were hurting, I couldn’t get sleep, but from there, we grew to 100,000 (subscribers) in the first year.

What do you attribute that huge following to?

To be honest, I think being one of the first ones to do it but do it the right way and not cut corners. We hired two filmers, a full-time editor, and we put the money back into the product. I always wanted to have the best quality product. Yeah, some videos might get more views in surfing, but who has the best quality product? To me, that’s very important, and that’s being kid-friendly so anybody can watch. Parents come up to me all the time and say, “thank you so much for making something my kids can watch on YouTube. We never let them watch YouTube.” We don’t swear. We don’t drink. We’re clean-cut. It’s pure entertainment, just fun and relatable. 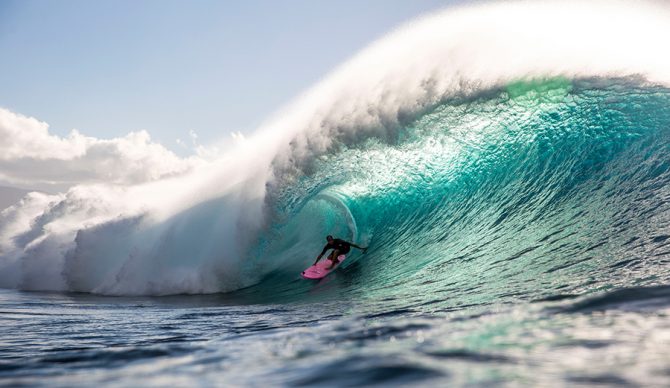 The best advertising for his Catch Surf partnership? Riding Pipe on a soft-top. Ryan Miller//Red Bull

The vlog is likely at an all-time high, so why start a surf school?

I always thought it’d be a really good idea. I’ve always told Kaikea Elias my business partner, that we should start one, but the stars never aligned. Part of my vision to start a surf school was to show the world that the same board I ride Pipeline on and ride in my vlogs, you can learn to surf on too. These boards (Catch Surf) are legit, and you can learn to surf on them.

So you’re partnering with Turtle Bay?

The reason we didn’t start a surf school earlier is because it’s all about location, location, location. When Turtle Bay shut down their lesson program, we reached out to the new owners and put something in front of them they couldn’t resist. Our whole goal with starting this business is to raise the bar for surf schools. We want to be the top-tier surf school in the world, and that’s exactly how we presented it to them. I don’t think surf schools have ever really been done correctly. If I’m gonna start a surf school and teach kids to surf and give kids the gift my father gave me, I’m not gonna take any shortcuts. We’re gonna do it the right way, just how we approach the vlogs.

So you’re going at the school with that same quality-first mentality you approach filming with?

If you go down to our surf school, all the boards are in premium condition. All our guests are dressed up in nice Catch Surf tuxedos. We have premium golf carts. We spend the money to do it right. If you look at our social media, we’ve got the word out there. We’re not taking any shortcuts, from our website to our surf instructors and our whole business model. When it’s all said and done, I want to have four or five surf schools around the world that I can go out and visit and never work a day in my life because I’m doing what I love … We’re building the playbook for the modern-day surf school… And the hardest part is to get this whole thing set up and manage the different dynamics of running a surf school, which Kaikea takes care of so I can focus on the social media, interacting with guests, and bringing the (energy) of the vlog to the surf school.

Talk about Kaikea a little bit. Have you always worked together?

Initially, Kaikea was a grom sleeping on my floor. He was always a few years ahead in school and went to college early to get a degree in finance and entrepreneurship. When I heard there was a job opening at Red Bull, I recommended Kaikea. They told me that Kaikea couldn’t apply for the job because he was too young and (wasn’t) qualified, but he aced every part of the interview process and ended up getting the job. After a few years, my guy at Red Bull came up to me and said he was wrong about Kaikea and thank you so much for recommending him. Then, I called him up and said, ‘Turtle Bay’s shut down… We should start a surf school.” At first, he was like, “I don’t know man. I really like my job at Red Bull.” But I was able to steal him back. It’s been an amazing partnership so far. I allow him to do what he does best, and he always allows me to do what I do. And he rips, so that helps.

Tell us about the surf app.

Who are you targeting with the app?

We’re starting with intermediate surfers who want to learn how to compress correctly, improve their cut back, and learn barrel riding techniques. We’re aiming for the middle area of surfers, and we’ll eventually work our way out from there. There’s going to be something for everyone, like novelty wave surfing with Ben Gravy, strength training with Nate Florence, and more.

How are you differentiating your app from other stuff out there or existing YouTube surf tutorials?

The problem with those videos is that they’re 10-15 minutes long. So, you have to scrub through the whole video to find what you’re looking for. With our app, you can have every single thing you need to know about surfing in one place. You can find what you’re looking for in 30 seconds, save it, and go to the beach and nail it. They’re all doing a great job, but like anything in life, if I’m gonna do it, I’m gonna do it the best I possibly can. And that’s because I know how important it is as a surfer to learn. I used to watch Bruce Irons and Johny Boy Gomes surf religiously, and that’s how I got to learn. I feel like this is going to be a really groundbreaking app and the surfing world needs it.