*Featured in The Buzz Magazines

Carson Crain grew up in the middle of Houston, a city more known for sports on grass than on open, wind-swept water.

Yet this Rice University student and St. John’s School graduate is hoping to make his way to the Olympics – as a windsurfer.

This summer, after training in Toronto, Carson competed in RS:X windsurf racing in the Pan American Games as part of the U.S. Sailing Team Sperry. He placed sixth overall, putting him one step closer to qualifying for the 2016 Summer Olympics in Rio de Janeiro, Brazil.

Back in the summer of 2000, Carson’s parents, Malinda and Alan Crain, took him and his brother Phillip to Maine, to the Northeast Harbor Sailing School, where Carson had his first experience sailing an Optimist sailboat, a small, single-handed dinghy for children. Sailing came naturally, and he began racing competitively, competing mostly in Galveston.

In 2005, Carson was competing in the Texas Youth Sailing Regatta in Corpus Christi when he met Paul Foerster of the 2004 U.S. Olympic Sailing team. Foerster let Carson hold his Olympic gold medal, and at that moment, Carson says, he made reaching the Olympics his life goal. He began to compete in higher-stakes races, traveling abroad, to Holland, for the first time in 2006.

Carson switched to the Laser, a more-sophisticated boat used in Olympic sailing events. For three years, he honed his skills and became a top competitor in his age group. In 2011, with his senior year of high school approaching, Carson faced a decision. The Laser is typically sailed by larger athletes. At the time, Carson was a shaggy, blonde 18 year old who weighed 165 pounds.

Carson decided to take a huge risk and switch to windsurfing. He’d never done it before, but with his size and ability, he thought it would be a better fit to reach the highest competitive levels in order to keep his Olympic dreams alive. 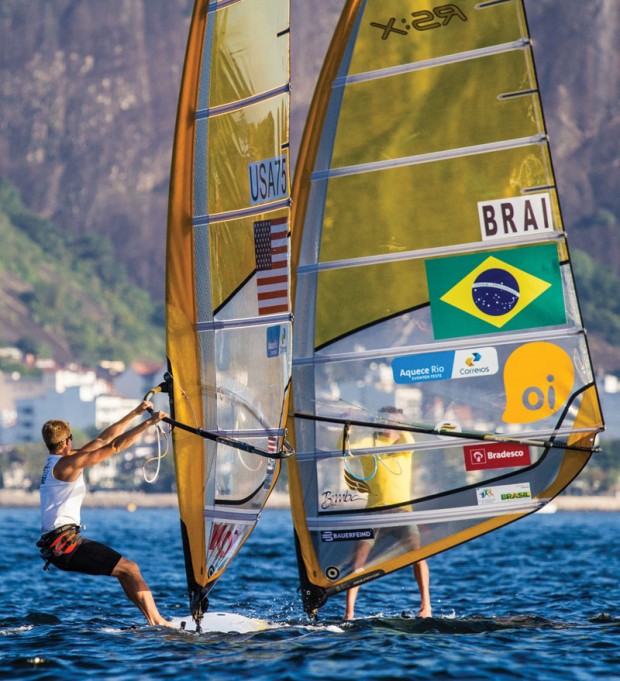 Carson sails past a competitor while racing in Brazil. (Photo: Will Ricketson/US Sailing Team Sperry)

While windsurfing and sailing are similar in concept, windsurfing is a far more physical version of the sport. Most people think of windsurfing, and assume that wave riding is involved, but in racing, that is not the case. In windsurf racing the athlete stands on a board with a sail and uses strength to balance and generate momentum through pumping.

Carson’s coach, Kevin Stittle, says his student has natural talent. “Carson is one of the newest and youngest windsurfers on the Men’s RS:X international circuit. He continues to impress the more experienced competitors with his remarkable progress and his determination to be the very best.”

Carson trains hard on land to get as fit as possible for competition. His trainer, Hayden Cowie, says, “Carson is absolutely the most dedicated athlete I have ever worked with.  He is serious about his workouts, always gives 110 percent and never makes excuses.”

Carson’s training paid off, and he was able to make the transition to windsurfing seamlessly, opening a new chapter in his life, full of competition and travel all over the world.

With high school graduation approaching at St. John’s, Carson made yet another important decision. He had been accepted to the College of Charleston in South Carolina, known for its prestigious sailing program, but he didn’t want to leave his coach and trainer back in Houston.

In June 2012, Carson’s prayers were answered when he received notice of his late acceptance to Houston’s Rice University. At Rice, Carson could continue his training, while studying sports management and sports medicine. “Choosing to attend Rice pretty much kick-started my Olympic campaign and allowed me to study what I wanted to study. In two years I’ve only taken three finals at Rice; the rest I took while traveling.”

Over this past year, windsurfing has taken Carson to Brazil, Spain, France, Italy, Maui, Holland, Canada, Sweden and his favorite, New Zealand (where he also competed in stand-up paddleboard racing).

At the ISAF World Cup in Miami in January, Carson placed first among his fellow U.S. sailing teammates in the RS:X Windsurfing Championships, cementing his place as a top American contender.

There is still a long journey ahead if Carson is going to reach Rio next summer. Success at upcoming races in Miami, Spain and Oman would put him one step closer to qualification and, just maybe, an Olympic medal of his own.

One thought on “Windsurfing Towards Rio”