Join 15 other subscribers
Posted on July 25, 2022 by Morgan Bernard

One hot summer day, I was sharing stories from a fun session at a remote left in Southeast Asia. The wave breaks into a serene, crescent-shaped cove littered with urchins resting below the surface of the postcard-worthy turquoise water. Midway through my description, my friend asked me, “how big were the waves?” A fair question, but not the easiest to answer when talking to someone who doesn’t surf. Sets were rolling in at about head high, with the occasional overhead set, but to a non-surfer, that vernacular means little.

Rather than indulge my inner surf geek by delving into the varied schools of thought surrounding the measurement of wave heights, I pulled out my phone and showed him a photo of me bottom turning in front of an ever so slightly overhead emerald face.

“Oh, so about seven feet,” he replied while glancing at my phone screen.

I stared at him dead-eyed for about 30 seconds before I shook my head and said, “Not exactly, more like head high,” giving into typical surf speak. 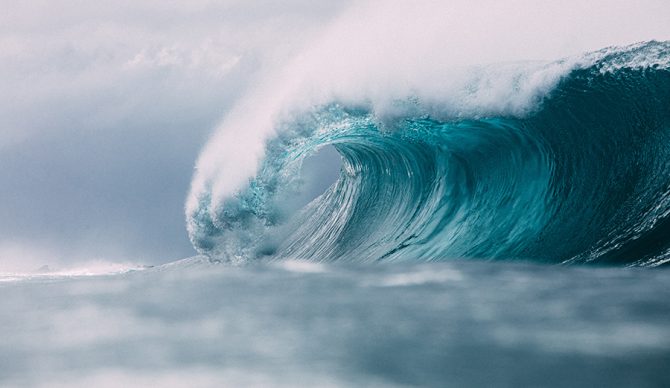 Well, that depends on who you ask, where they’re from, and their level of surf experience. A head-high wave on the East Coast is confidently labeled five feet. Given that the average male adult stands at approximately 5’10″ and crouches while surfing, this measurement should be accepted by most.

Travel just under 3,000 miles due west, and that same head-high wave is perceived quite differently. While doing your best to shimmy into a damp wetsuit in the parking lot, you may hear the usual parking lot peanut gallery comment on a near-identical wave and claim it to be four-feet tall, one foot shy of their East Coast counterparts.

Continue 2,500 miles out to sea until you run aground in the Hawaiian Islands, and your “fun,” head high wave is mocked as barely two-feet tall. In some circles, it’s not considered worth paddling out at that height. Inversely, when you hear it’s about six feet in Hawaii, you can expect cavernous barrels that would fit several grown men stacked on top of one another.

The basis of each geographical area’s measurement system may seem like nothing more than guesswork and a firm undersell to impress whatever parking lot posse is lingering around sipping on hot cups of Seven-Eleven coffee. However, credible scientific methods provide a potential explanation for each system. 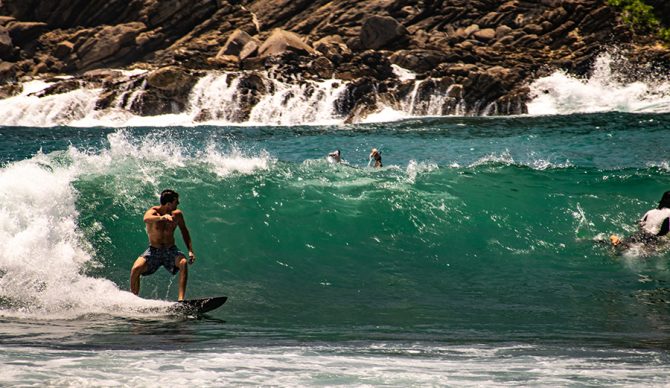 Trying to measure with my bow-legged bottom turn. Photo: MB

The East Coast system, which on the surface seems to be somewhat accurate or maybe even a little too generous, likely derives its findings from a technique developed by Willard Newell Bascom. The Bascom Method has beachgoers onshore measure the wave from the crest to resting sea level. The East Coast measurement system likely aligns itself more closely with the Bascom method because it’s laced with just a pinch of optimism and hope for solid groundswell, which is a rare occurrence on the right-facing coast.

The West Coast method most nearly represents a system labeled the Surfable Wave Face Method. This system measures the wave’s height from crest to trough, with the lowest point being the last possible area of the flats from which a surfer can bottom turn. Even though the Surfable Wave Face Method is the most logical, our perception of waves is hindered by our collective ego that drives us to undersell waves and laugh in the face of danger or exaggerate boldly.

Unlike the other two methods, The Hawaiian Method, which traces its origins back to the original big wave surfers of Waimea Bay, measures a wave’s height from the back rather than its breaking face. The result is a measurement that is approximately half the height of the wave’s face.

Regardless of which method you prefer, there’s no reason “seven” should be omitted from any of the three systems. Maybe number seven just doesn’t sound as menacing as other numbers and is therefore left out. What many surfers know to be true is that if a wave is seen, whether from the beach, the parking lot, or in the pages of a magazine, its height is generally underestimated, and intentionally so. Nothing is more macho than unflinchingly demoting danger. If a wave is unseen, like that barrel you told your friends about when they were stuck going into work early, the wave height is likely exaggerated. The grass is always greener, and the fish gets bigger each time you tell the story.

The fact that in surfing, our collective ego prevents us from accurately recording moments of natural history is not only self-limiting but hilarious. No surfer worth the weight of their soaked wetsuit will acknowledge the existence of a seven-foot wave, yet oceanographers and meteorologists will tell you that seven-foot swells are regularly clocked at various buoys around the world.

Like the churlish ogre at your local gym who shouts, “lightweight!” before lifting some hernia-inducing load, surfers are ego-fueled animals who seek praise by belittling conditions and putting down the accomplishments of our peers. Had my friend been a fellow surfer, he probably would have ignored the wave’s size and instead zeroed in on my slightly bowlegged bottom turn.

So, are there seven-foot waves? Yes. For now, I’ll stick to layman’s measurements and continue to give my friends shit when they claim they’ve surfed anything above six feet without photo evidence.